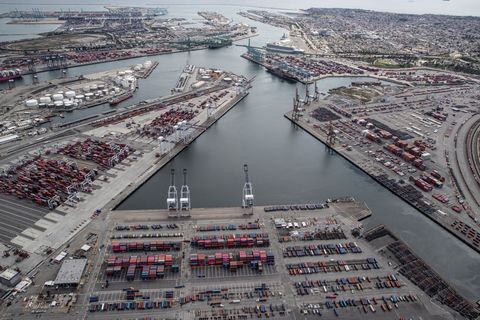 If you’re feeling like there’s not enough room in your own home or apartment these days, imagine trying to cram 2000 cars in there. A version of this spatial challenge happened in Los Angeles when a large cargo ship carrying about that many Nissan and Infiniti vehicles arrived and then someone told the ship’s captain, in short, we’re all full here so thanks but no thanks.

The cargo ship in question is the Jupiter Spirit, a 600-foot-long (183 meter) vessel operated by Nissan Motor Car Carrier Company that sails under the Liberian flag. After a three-week trip from Japan, where the vehicles were produced, the ship was forced to float offshore for almost a week before finally being allowed to unload its cargo April 29. The Jupiter Spirit is currently on its way up to Tacoma, Washington.

The reason for the delay was that port operators were dealing with already crowded acres of cars, part of a backlog created by the steep decline in auto sales due to the coronavirus. Port officials in the area had filled their existing lots and were investigating temporarily storing the vehicles at places like nearby fairgrounds and military bases. John Felitto, an executive at the Norwegian shipping company Wallenius Wilhelmsen, told Bloomberg: “This is different from anything we’ve seen before. Everyone is full to the brim.”

The floating 2000 vehicles—Nissan Armada SUVs, Rogue crossovers, and Infiniti sedans, according to Bloomberg—are part of a trend in the global supply chain caused by lower demand for products, including oil. Oil-filled tankers were also forced to wait offshore recently when oil futures were recently trading in negative territory. Most of the ports that are dealing with an excess of vehicles are on the West Coast, Bloomberg says, but this is likely to be temporary, lasting until the production backlog is shipped and production rates decline to match consumer demand. Hueneme Port in Ventura County, California, told Bloomberg it expects auto shipments to be down 25 percent this year.

Nissan isn’t the only automaker that has had problems finding places to send its vehicles recently. Hyundai shipped almost 34,000 vehicles from Korea to the U.S. in March this year, an increase of more than 4 percent compared to March 2019, and many of those ended up sitting in ports since dealers were not interested in accepting new inventory while potential shoppers are mostly stuck at home looking at all the stuff building up.

A Nissan spokesperson told Car and Driver, “Nissan is optimizing the flow of the vehicles and positioning them closer to dealers for quick availability when the market recovers and customers return to showrooms.”