For many, this is the year of the summer road trip. With a pandemic still gripping the country and keeping people off planes, it seems now is the time to load up the car and hit the road. So we did just that in our latest long-term test vehicle, the 2020 Volkswagen Atlas Cross Sport.

With a trunk full of luggage and the finest assortment of gas-station snacks, we set off from our office in Miami, Florida, stopping in Atlanta along the way, and then onward to Washington D.C. Our eight-day trip put nearly 2,500 miles on the odometer, with just shy of 34 hours of total drive time.

But before we dive into the trip details, here’s the lowdown on VW’s crossover coupe. The Cross Sport is a sleeker, two-row version of the Atlas SUV. It competes with alternatives such as the Honda Passport, and the Jeep Grand Cherokee. Standard fare is a 235 horsepower 2.0-liter four-cylinder, though our car packs the more potent 276-hp 3.6-liter V6. In fact, our Atlas SEL Premium 4Motion has just about every option you can throw on the Cross Sport, save for the sporty-looking R-Line package.

The Cross Sport V6 SEL Premium (equipped with all-wheel drive) starts at a not-cheap $48,095 – a sizable hike over its sub-$32,000 base price. Our build sprinkles in a few cosmetic additions, like the awesome $395 Aurora Red Chroma Metallic paint, $105 rubber floor mats, and $365 crossbars. All in with destination, our car sneaks in at just under fifty grand with a total MSRP of $49,980. In no uncertain terms, that is a ton of money for a two-row crossover, but at least our pricey VW stays competitive with a laundry list of features.

Opting for the SEL Premium loads up the interior with real leather surfaces, a 360-degree overhead camera for parking, an 8.0-inch touchscreen, complemented by a 10.2-inch digital instrument cluster, and 12-speaker Fender audio system. Other nice touches include heated and ventilated front seats, heated rear seats, and a massive panoramic glass roof. Safety equipment is robust, too, with blind-spot monitoring, rear cross-traffic alert, lane-keeping assist, and adaptive cruise control that can bring the car all the way down to zero miles per hour.

Phew. With all that covered, let’s get to driving.

Save Thousands On A New Volkswagen Atlas 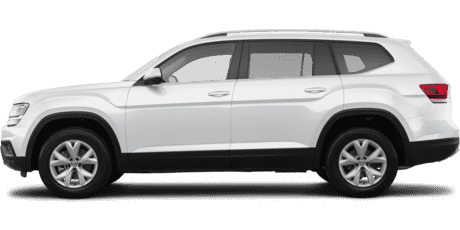 Some Ws For the VW

We broke our drive up into four separate eight-hour chunks, leaving plenty of time to analyze the Cross Sport to absolute pieces. Let’s start with the wins, of which there are several.

The Cross Sport has a massive second row; not just for average-height adults or kids, but for your tall friends, too. With 40.4 inches of rear legroom, the Cross Sport outdoes both the Passport (39.6) and Grand Cherokee (38.6). For context, that’s also more than you’ll find in a Lexus LS flagship sedan. And yes, even with the sloped roof, the near-38 inches of headroom is still aplenty for those in the rear seats. During a long road trip where passengers want to switch around who rides shotgun, the backseat is a welcome reprieve for a nap or just to stretch out.

The next tick in the win column is Volkswagen’s suite of active driving aids which comes standard on our SEL trim, mainly the adaptive cruise control. Only Florida’s famous heavy summer rainstorms could stop the system from working, otherwise, the ACC worked like a champ mile after mile. The Cross Sport tends to start braking a few seconds prior to when it seemed necessary, but we appreciate the car’s quick reaction time. VW’s lane-keep assist does require hands on the wheel all the time – if not, the car will ping pong between the lanes far too much – but it’s still a nice feature to have. All things considered, this is a responsive, well-mannered collection of driver assistance tech.

Volkswagen doesn’t sell this behemoth in Europe, so every part of it feels properly engineered for the U.S. market (for better or worse). Cupholders are plentiful, there are countless places to throw your phone, USB ports in both rows for device charging, and the heated/ventilated seats work well. The trunk (although just down on cargo space to the Passport’s 41.2 cubic-feet) is absolutely massive, with 40.3 cubes of space. Sacrificing the third row of seats does wonders for space, and even a team of four people couldn’t fill the VW’s trunk to the brim.

A Little Too American

We’ve already mentioned that the Atlas is built for American crossover buyers, and it feels exactly as such from the driver’s seat. Coming from the same company that makes the tremendous GTI and other great drivers like the Arteon, the Atlas is completely devoid of personality, even for a vehicle of its size. The steering feel is comically light and mime-silent on feedback.

Meanwhile, the brakes are touchy at first and ultimately become hard to modulate (ask our friend who wore a half-cup of coffee after a sudden traffic jam). The biggest offender, however, is the noisy driving experience with tons of wind and road noise entering the cabin. Yes, the optional crossbars are to blame for most of this, but even with the accessory temporarily removed for a portion of the drive, the VW was still quite full of unwanted sounds on the highway. A silver lining to all of this is a refined, pleasant ride quality, which we’ll detail in upcoming reviews.

The Atlas is built for American crossover buyers, and it feels exactly as such from the driver’s seat.

Despite being the upgraded engine choice, the 3.6-liter mill feels underpowered. With 276 hp, 266 lb-ft, and a curb weight of 4,400 pounds, the Atlas should move along just fine. But time and time again, passing on the highway required a huge boot of throttle and several seconds of acceleration. The competition isn’t exactly full of performance all-stars, but the Atlas feels cumbersome, making us wonder if the V6 is worth the extra money.

In that same vein, the fuel economy could be better, too. Equipped with the bigger V6, the Cross Sport is good for an EPA-rated 16 city, 22 highway, and 19 combined. Our trip computer at the end of an 8-ish hour stint of entirely highway driving showed 21.2 mpg. To add some context, a three-row Kia Telluride can do 24 mpg on the highway and similar Toyota Highlander can do 27. It might not seem like such a big difference, but over the life of ownership, VW’s engine simply isn’t as efficient as some of its rivals.

The Atlas Finds A Friend In Atlanta

We still have plenty more to explore with our long-term Atlas Cross Sport, but our road trip review tells us a few things. Volkswagen’s crossover coupe is pretty well matched to its competitors, offering similar content and practicality. Put to practice in a real-life family-use scenario, the Cross Sport left us impressed by how well it handled itself. This is an immensely comfortable vehicle, with freakish levels of space inside. If you’re not in need of a three-row family hauler, then the Cross Sport should earn a spot on the shopping shortlist.

Even after a successful first test, we’re still left wondering whether or not our car is worthy of its near-$50,000 price tag. For that kind of money, there are great options just about everywhere you look, and likely with less stress on the wallet. Stay tuned as we answer that question, along with many more in the coming months.