Dodge, Kia have highest owner satisfaction; Tesla has the worst

Dodge is the first domestic automaker in the 34-year history of the survey to rank highest for initial customer satisfaction. It tied Kia for only 136 consumer complaints per 100 vehicles. Tesla is the only automaker this year to not give J.D. Power access to vehicle info from consumers from all 50 states. Instead, J.D. Power culled consumer data from 35 states and projected those results across the 15 states lacking data. That resulted in 250 consumer complaints per 100 vehicles.

The industry average across the 31 brands ranked for 2020 was 166 complaints, with complaints about confusing or glitchy infotainment systems again leading the gripes. Almost 25% of all complaints were attributed to infotainment and issues with voice recognition, Apple CarPlay and Android Auto connectivity, and touchscreens. Android Auto users were more dissatisfied than CarPlay users, and were more likely to stop using it.

Infotainment issues nearly doubled the next complaint category of features, controls, and displays.

“Infotainment has been the most problematic for many years now and continues to be,” said Dave Sargent, VP of automotive quality at J.D. Power.

Unlike other automakers, Tesla received the most complaints for exterior build quality of doors, paint, and panels.

“Tesla has some quality challenges, largely around the manufacture of the vehicle due to the exterior,” Sargent said. He added that Tesla consumers were satisfied with the infotainment and all-electric powertrain. 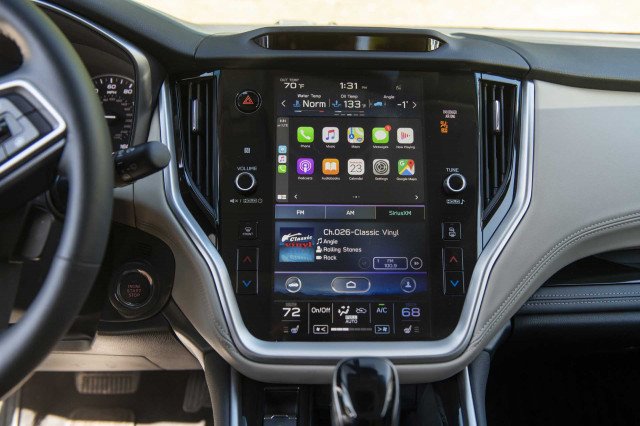 The infotainment issue underscores the challenge for automakers to roll out simple systems that aren’t too layered. Premium brands have suffered in the annual survey due to confusing tech, according to their owners. Mass-market brands outperformed premium brands and have caught up in fundamental build quality, analysts said.

“Brands that launch a lot of new vehicles or have confusing tech tend to struggle,” Sargent said. “Brands that deliver a simple tech experience tend to perform much better.”

That partly explains why Dodge did so well in this year’s revised survey. Most Dodge vehicles have been around for a while with technology that’s more mature. Still, Dodge performed well with customers, which is what matters most, officials said.

“In some cases the tech is not as avant garde (as competitors),” Sargent said. “But FCA has done a really good job of delivering consumers what they want.”

“Consumers want a vehicle that is easy to understand, has a great user experience, and can be trusted, especially as we move to more assisted driving,” he added.

The driver-assistance category was new for 2020 and represents a shift in modernizing the survey of nearly 90,000 owners and lessees of 2020 vehicles. Respondents answered 223 questions related to satisfaction within the first three months of ownership, and there were 11,000 more respondents than in 2019. Those questions were broken down into nine categories, including infotainment; features, controls, and displays; climate; seats; driver-assistance features; interior; exterior; powertrain; and driving experience. 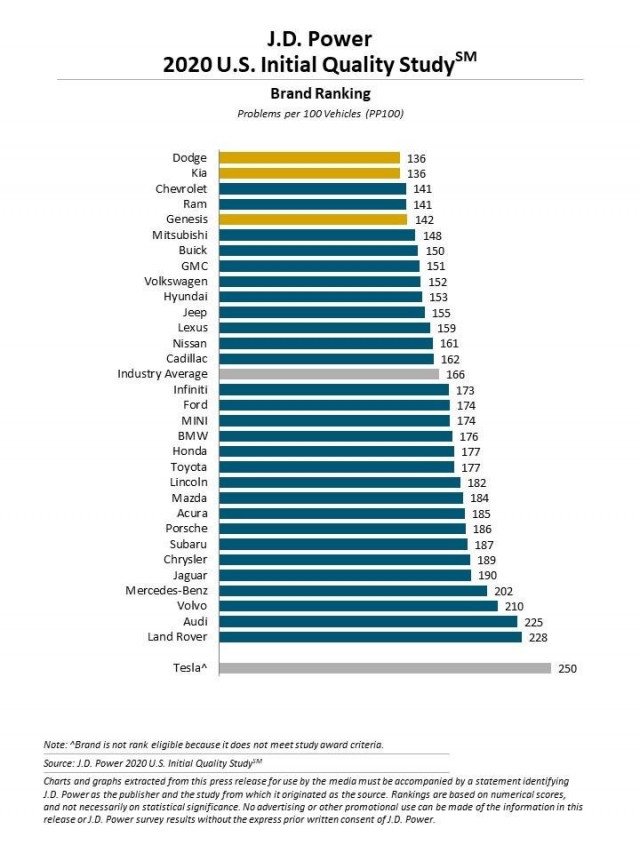 The streamlined survey resulted in the average complaints increasing 78% from 93 per 100 vehicles in 2018 and 2019, to 166 per 100 vehicles, on average. That doesn’t mean quality has lessened, Sargent said. It means J.D. Power is asking better questions.

“The level of problems are significantly higher but that doesn’t mean quality has gotten worse; if anything its gotten better,” he said. “We’re asking about a whole bunch of features we didn’t ask about last year.”

The J.D. Power survey is the industry benchmark for consumer satisfaction that helps automakers make better cars and allows consumers to compare like vehicles.

“Kia has as much tech as other mass-produced makes, they’re just easier to use,” Sargent said.

Japanese brands faltered after setting the bar for quality for so many years. Only Mitsubishi (148), Lexus, and Nissan (161) were above average. Volkswagen (152) jumped into the above-average part of the curve, and Hyundai (153) continued its strong performance.