Unpopular and scientifically proven to be untrue. However, proof and science will not change my point of view when it comes to twin turbos for a street car.  While things may be different in the last 10 years, my experience in the 10 years prior to that, with single turbo manifolds was nothing but frustration.  Between them not fitting correctly, leaking at the head, warping, cracking, and melting things, I got my fill. We endurance raced a car with a thick flange, thick tube, basic log exhaust manifold, and we still cracked it when racing.   Turbo technology has improved in the last 10 years, but honestly nothing I would call amazing, or magic, unless you include not available to the public electrically assisted turbos.

Cast exhaust manifolds on an RB26 do not fail. I have never seen them fail.  Tubular exhaust manifolds, even stock replacement on an RB26 fail.  I have tried them all, had them all leak and fail.  The R34 race car N1 cast manifolds had a few interesting mods done to them, but nothing that cars not running an endurance race will need.
This is an interesting test on a 4G63, as a twin turbo setup, undermanifold on an RB26 has a relatively small tube diameter, and is fairly short.  Most single turbo setup manifolds have a lot of volume to fill before they start to push on the exhaust wheel. This effects response and power production, up to a point.

Large runner vs small runner testing on a Mitsubishi Lancer Evolution from Morrison Fabrications.  In this test of two different exhaust manifolds on a 4G63, they tested a Borg Warner S362SX-E with a 76mm turbine, and .91 divided T4 exhaust housing. The large runner had 1.68″ ID, or 1.75″ tube, and 1.42″ ID, or 1.5″ tube.

During this test, the small runner manifold increased spool by 160-220rpm over the large runner manifold. This was also accompanied by a large increase in VE/fueling requirements, particularly during spool up, that resulted in more power/torque at the same boost level nearly everywhere with the smaller runner manifold. Torque was augmented from 40ft/lbs to as high as 125ft/lbs during spool up and as much as 42ft/lbs in peak torque numbers. Horsepower was augmented as much as 50whp at some points in the curve and ranged between 19-25 higher peak horsepower numbers.

We run a pair of turbochargers on our RB26 in our Project RH8 R33 GT-R. Cylinders #1, #2 and #3 feed the front turbo while cylinders #4, #5 and #6 feed the rear turbo. Because there are no cylinders that fire in sequence paired to the same turbine, the amount of time between exhaust valve events that will happen on cylinders feeding the same turbine has doubled. Instead of having only 120 degrees, there is now 240 degrees.

So if your exhaust housing, and exhaust manifold for your single turbo are not twin scroll, you are giving up some response as shown in the Dsport Magazine article. 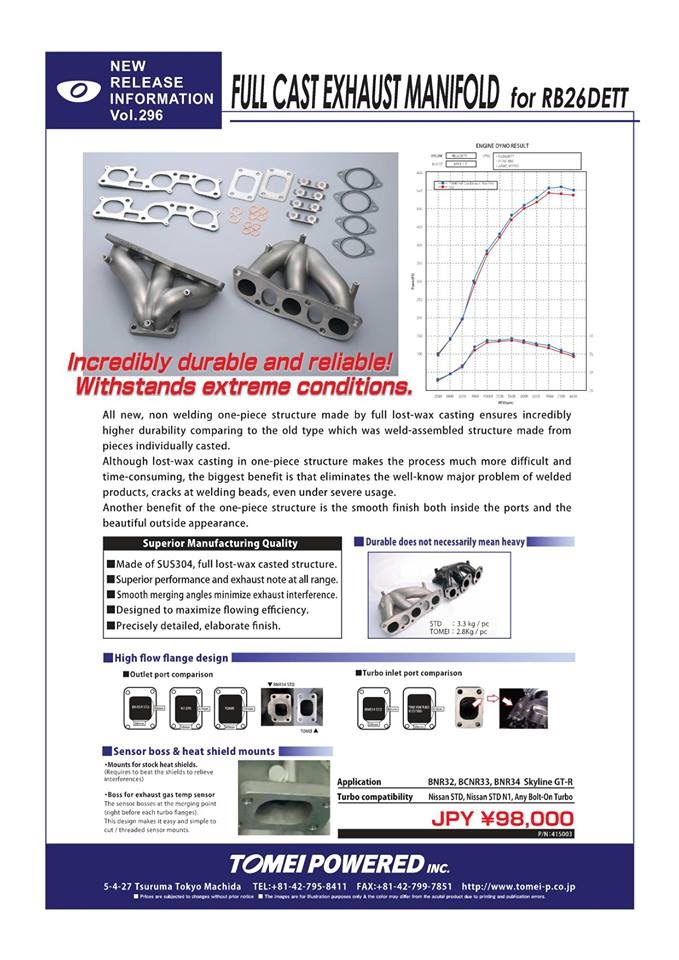 All this talk about exhaust manifolds and no talk about turbos yet.   The OEM R32, R33, and R34 GT-R turbos, on the “normal, and Vspec” cars are all ceramic exhaust wheels. There are some cars that have metal turbine wheels, the Nismos, the later N1 cars, a few others, but generally they are ceramic. Being ceramic is awesome for weight.  The lighter the wheel, the easier it is for the exhaust energy to act on the exhaust wheel. The exhaust wheel is mechanically coupled to the compressor wheel, so the easier it is to push that, the sooner that the compressor wheel, starts compressing, the sooner the magic happens. However, ceramic wheels are somewhat fragile. Or, really just not as durable as a metal wheel would be a better statement. 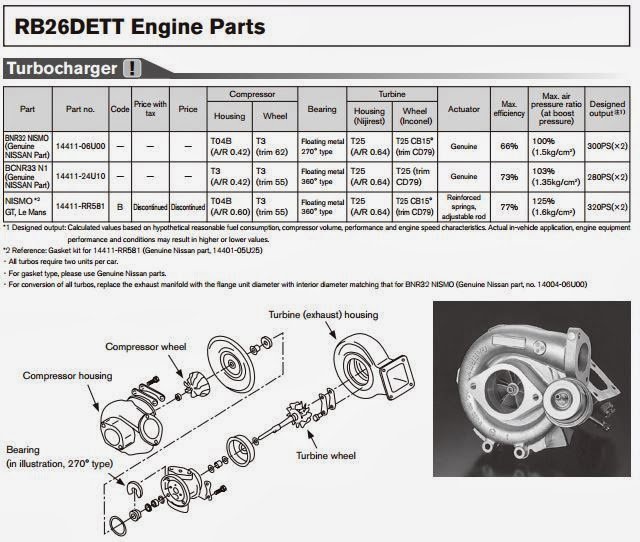 On the exhaust side, you can 100% have too small an exhaust housing. There is a point, when no matter what you do, you have so much backpressure across the turbo, turning it up anymore, doesn’t gain anywhere near the amount you think you should.  It is something that isn’t talked about a lot in the turbo world.  Some people assume the smallest exhaust housing will give them the best spool, minimize lag, and still be able to make power. However once you get above the 1:1 ratio of boost to backpressure, you are done.  In the video below, Gale Banks explains boost to backpressure ratio. He knows his way around turbochargers, you should listen to what he has to say. You will probably learn something.

Billet wheels CAN, again that is CAN, perform better. Because they can be a low production run of wheels, there flow and performance can be tailored to running a specific pressure ratio (PR) or to have a certain amount of peak flow, or surge line capability, or be able to jump on new blade design technology faster since there is no need to delay the technology getting to market because of setting up machining and tooling.

So that all is just some notes about why and what may or may not work. You need to have knowledge of that in order to make some good choices for your twin turbocharger setup.

ATP Turbo sells a number of bolt on Garrett choices for the RB26dett.  The horsepower ratings are at the engine, and in the best most perfect world that unicorns live in.  In the real world, on 91 octane fuel, and 1 bar of boost, your output will vary greatly.   As a general idea, the Nismos will do about 400 wheel in a pair, the N1 about 425 wheel in a pair, 2530 about 500 wheel in a pair, and -10 about 550 wheel in a pair. E85, wound up, magic dyno correction will all vary your numbers.

These are pretty huge. 54.1 mm inducer. 71.4 exducer on the compressor side.  56.5 mm inducer and 53.6 mm exducer on the turbine side. In the meat of the efficiency they flow about 40 lb/min airflow at 2.5 pressure ratio on the compressor. Exhaust side with the 0.64 trim maxes out at about 19 lb/min at 2.5 pressure ratio. In theory these should do about 100 horsepower over the GT-RS at the same boost levels.  But wait, there is more.  The next step up in the GTX bolt on RB26 lineup.

If the last ones were big, well these are more bigger. 58 mm inducer, 76.6 mm exducer. However the exhaust side is the same.  We have run into issues in the past when, even stepping up the compressor side, we saw no more power as the turbine was just tapped out.  We think this could be a possibility here with this turbo. In the meat of the efficiency they flow about 45 lb/min airflow at 2.5 pressure ratio on the compressor. Exhaust side with the 0.64 trim maxes out at about 19 lb/min at 2.5 pressure ratio. Again in theory another 100 horsepower over the GTX2971, 200 horsepower over the GT-RS turbos.

One other potential option is the Gen II GTX 2867R

Where theories and realities meet are on the dyno. When working on another vehicle, we did several hotswaps of a single turbo setup with different turbocharger setups. The exhaust housing stayed the same, and even with three different turbos, we saw almost the same amount of power. Until we swapped exhaust housings did we see more power. Everything shifted right about 300 rpm, but we gained the power we were expecting.  We were not logging exhaust backpressure pre turbo, but it is something you should think of logging if you are serious. 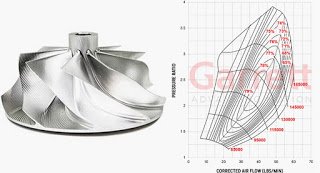 Then there are some other options now, that this car has the JGTC manifolds. Those include the new G series turbos.  Those will not be exact bolt on, and they won’t work for most, so using them may not really gather much real data.