How to be a Covid camper

Got the camping bug? Want to explore these United States but don’t have the best car for it? Don’t fancy a massive RV or a flimsy tent? Then it might be time for a camper van.

Camper vans are all the rage, and van life was trending for a few years before spiking in 2020 due to travel restrictions caused by the coronavirus pandemic. Sales of RVs and campers skyrocketed in May, according to Bloomberg, with many RV customers as first-time buyers. They even have a name: Covid campers.

In the next year, 46 million Americans plan to take an RV trip, according to a recent survey conducted by Ipsos for the RV Industry Association.

“As states across America continue to open up, more and more consumers are looking for ways to get outdoors and recreate responsibly,” said RV Industry Association President Craig Kirby.

Those numbers could be biased but hashtags support the trend. On Instagram, “#vanlife” has more than 7.2 million posts from people recreating in their vans, campers, and other adventure-type vehicles in locales that range from the picaresque to the, well, dumb.

But how can you get in on the action without making a commitment to a tour bus-sized RV?

To buy or not to buy

Buying a camper van, or Class B motorhome, direct from the manufacturer presents very limited options. Class B vehicles are the smallest RVs and fit well in urban areas as well as the great spaces between the cities.

You could import one from the European market, such as the Volkswagen California. That’s right, you could import a camper van named for a U.S. state that’s not sold here. But importing is complicated, expensive, and potentially illegal, so here are a few other options to buy direct from the manufacturer. 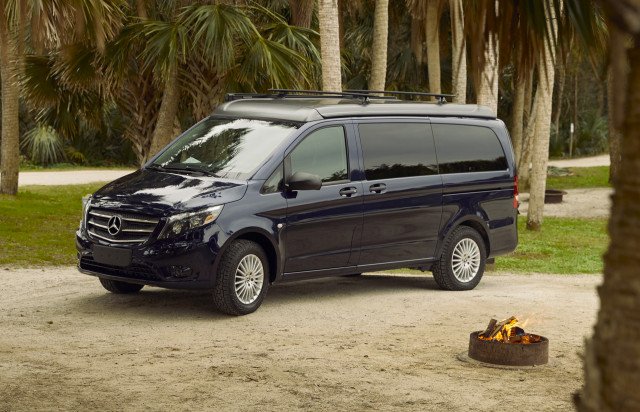 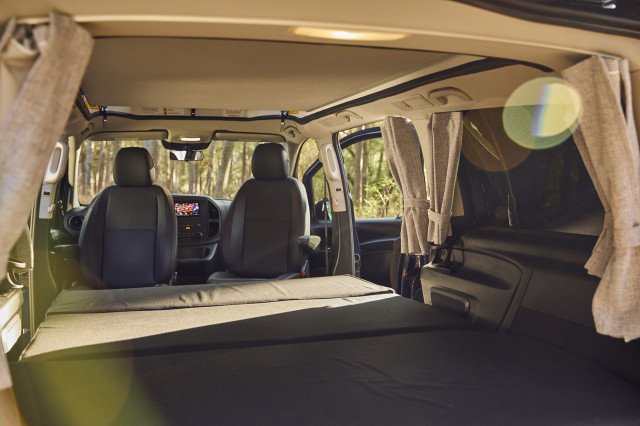 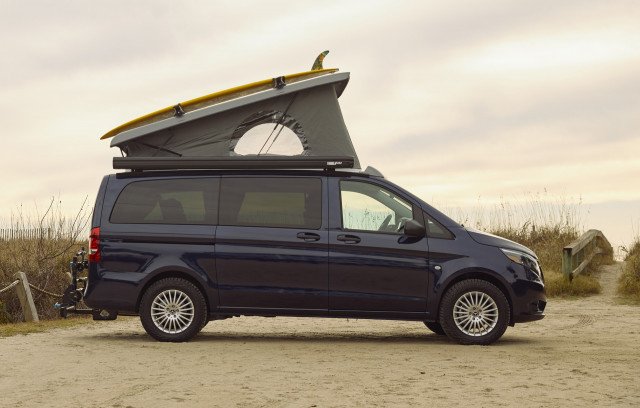 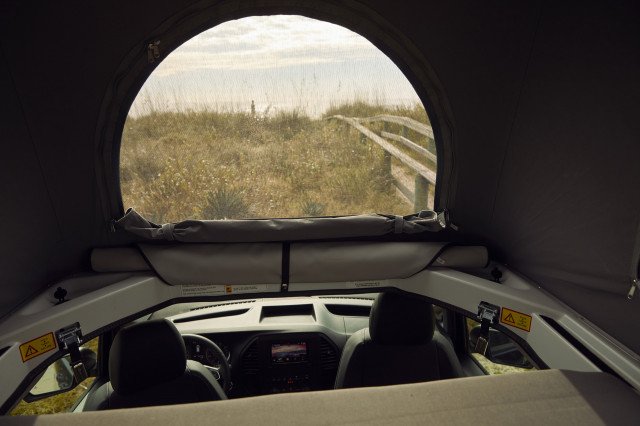 Mercedes makes an array of pop-up camper vans, but the Metris Weekender is the first of its kind in the U.S. and is made in the U.S. With the help of upfitter Driverge and Peace Vans, the cargo van becomes a mobile home roomy enough for van living but compact enough for urban sojourns. It sleeps up to four with a rear bench that folds flat into a bed for two, then the penthouse in the elevating roof features a 2-inch thick mattress and room for two more, as well as three windows for a view. The front seats swivel 180 degrees so your foursome can play Euchre, there’s a second battery for van living, and it tows 5,000 pounds via a 208-horsepower 2.0-liter turbo-4. Customizing options include solar panels, an 8-foot awning, a tent that attaches to the liftgate, and a pullout kitchen.

Customers can order the Metris Weekender at a local Mercedes-Benz van dealership starting in the “low $70,000 range,” said Ashley Gillam, spokesperson for Mercedes-Benz USA. The upfitter, Driverge Vehicle Innovations, will then complete the timeline and delivery part of the process. 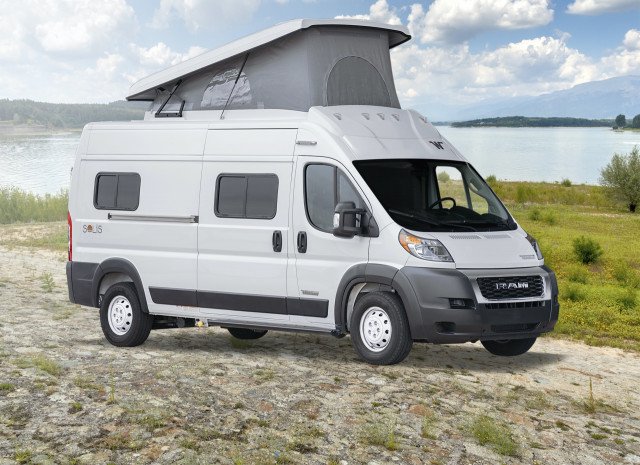 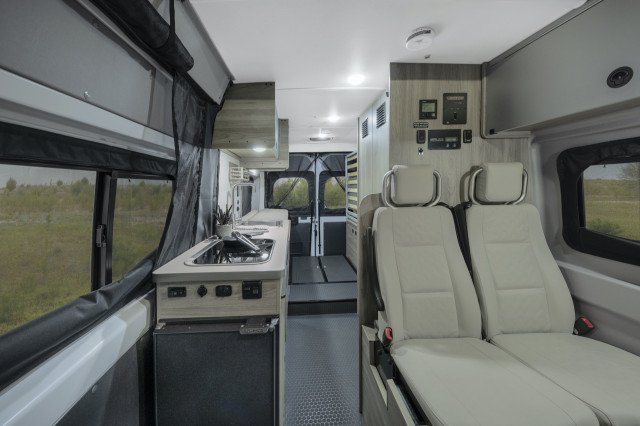 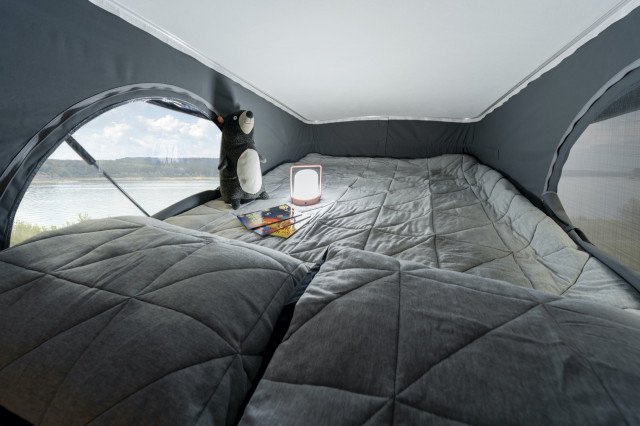 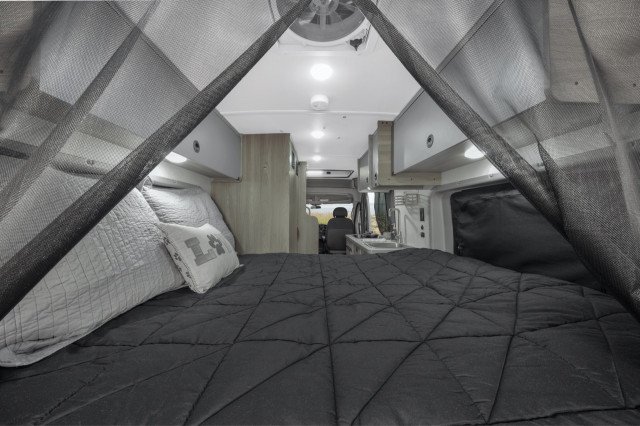 The smallest Winnebago is the Solis, and it’s one of the least expensive at $101,717. The new pop-up camper van measures 19 feet, 9 inches long, sleeps four and comes with either a Murphy bed or a sofa bed in back and a pop-up penthouse up top. Equipped with a kitchen and bathroom, the Solis has a collapsible dinette table with two chairs to complement the swivel front seats. It’s insulated and has a heated bathroom, an available solar roof, and a simplified water system. Even though it’s a Winnebago, the Solis uses Ram ProMaster power and parts, including its 280-hp 3.6-liter V-6 and 6-speed automatic transmission. The engine makes 260 pound-feet of torque, good enough to tow 3,500 pounds.

Like with the Weekender and the Solis, automakers have partnerships with upfitters to customize cargo and passenger vans to turn them into adventure vehicles. Recon Campers upfits the Nissan NV200, Sportsmobile converts everything from Mercedes Sprinters to Chevy Express vans, and Contravans turns everyday passenger vehicles such as minivans or SUVs or Ford Transit Connect vans into clever sleeping dens on wheels.

“There are adventure and commercial upfitters all over the country,” said Elizabeth Kraft, commercial vehicle communications manager for Ford. “Other areas of the world have more modular solutions. Americans prefer customization.”

The Ford Transit has more than 78 different configurations for 2020. 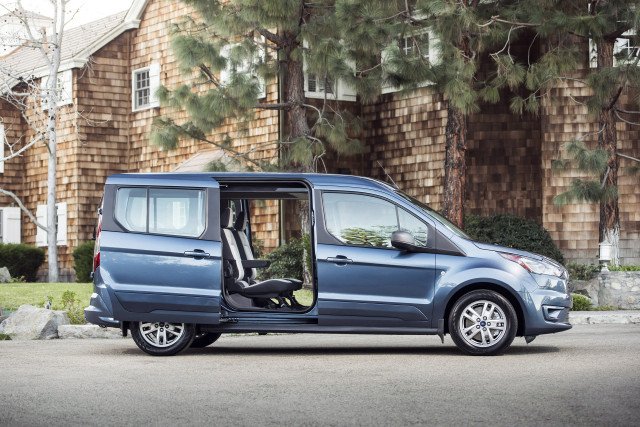 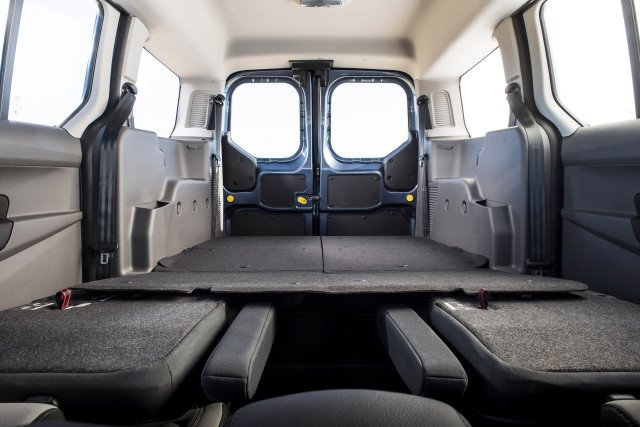 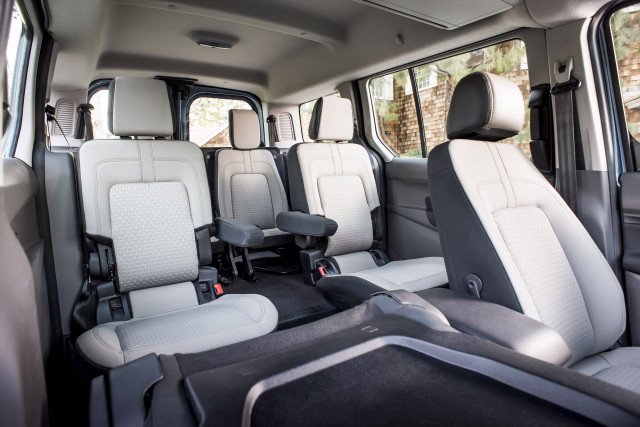 The level of customization is one reason why most automakers don’t sell camper vans themselves. “It would be silly expensive,” Volkswagen’s Mark Gillies told The Car Connection about why the California isn’t sold here.

The Ram ProMaster doubles as a popular camper van to upfit because of its versatility and adaptability.

That leaves the cargo area as an open slate for a multitude of configurations.

To upfit a Ford Transit Connect, Ford suggests choosing from established partners, such as Van Do It or Outside Vans. The upfitters work with dealers at the point of purchase, even helping the customer select the interior. The financing then can be done through the dealer network, Kraft said.

There are more than 500 upfitters across the country, and it could cost anywhere from $15,000 to $100,000 to convert a van or vehicle into your dream machine, Kraft estimated.

If owning an adventure vehicle or camper van seems like more than you need, there is no shortage of rental RV companies popping up like so many tents all over the virtual landscape. These Airbnbs on wheels range from $100/night for a pop-up trailer to more than $700/night for larger motorhomes, but each one is different as are the legal requirements for the various class sizes. Even Airbnb offers campers on wheels.

The website Outdoorsy connects RV owners with renters. Use the site to find RVs in your area or the desired area, and check on availability, amenities, and cost. Renters have to create an account, upload their license for a DMV check, connect with the owner, and pay through the site. Roadside assistance is offered through Outdoorsy for $15/day, and insurance is provided through either the owner or Outdoorsy, though the renter is responsible for a deductible that can range from $1,000-$4,000.

RVShare is another peer-to-peer service that works much the same way as Outdoorsy, and offers one-way rentals as well. It also includes commercial RVs from dealers, not just from private owners. Insurance starts at $10/day and ranges to $41/day for Premier coverage. Its deductible, typically $500-$1,500, is significantly lower than Outdoorsy’s. But the coverage value is also lower, from $1 million on Outdoorsy to $200,000 on RVShare. RVShare rentals include roadside assistance.

Other rental RV companies include Cruise America, which rent out RVs from its corporate fleet, and ElMonte RV, which is similar to RVShare but has a smaller network.

Whatever type of camper van works best for you,  options abound on how to be a Covid Camper and get out there and see America from a good social distance.