The Tahoe’s new for 2021, and it’s grown to gain some easy-to-see benefits: more third-row room, greater cargo volume, and enough space to handle all the generational family growing pains.

But there are consequences to bigness, too, as Josh Baskin attests to in the classic coming-of-age-overnight film, “Big.” Fuel economy succumbs to physics, the garage needs an upgrade, and the price gets correspondingly big in the redesigned full-size SUV. The loaded High Country trim eclipses $81,000 when equipped with Chevy’s coolest options.

Trucking around some of southern Michigan’s Metroparks on Lake Erie and along the Huron River, I found the Tahoe’s bigness to be no big deal behind the wheel. A new independent rear suspension cushions uneven grades, and magnetic dampers with an available air suspension ($1,000) let the new Tahoe float in a way uncommon in full-size SUVs like the Nissan Armada and Toyota Sequoia.

But the big news for the 2021 Tahoe is its bigness.

The 2021 Tahoe grows 6.7 inches longer to become almost last-generation-Suburban big, but the Tahoe’s larger twin still claims the size title—the 2021 Chevy Suburban is new this year too. Chevy says Tahoe is 4% bigger but it results in cargo room that increases by a whopping 30% thanks to nifty packaging. The Tahoe’s wheelbase extends by 4.9 inches to improve leg room in the third row and, along with a broader cut to the liftgate, increase rear cargo volume to 25.5 cubic feet, which is plenty for golf clubs and airport shuttles loaded with luggage. 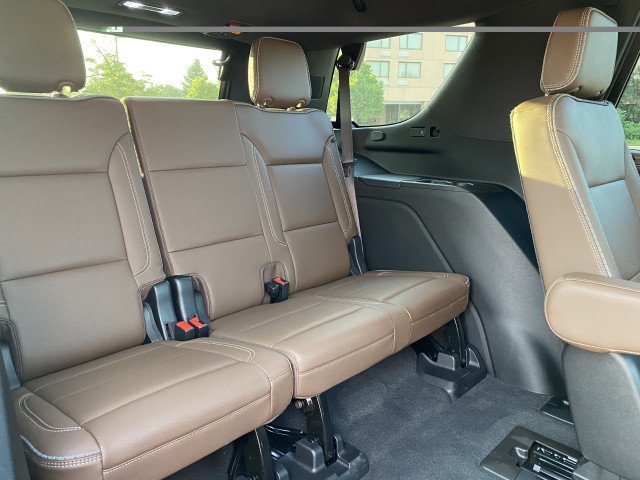 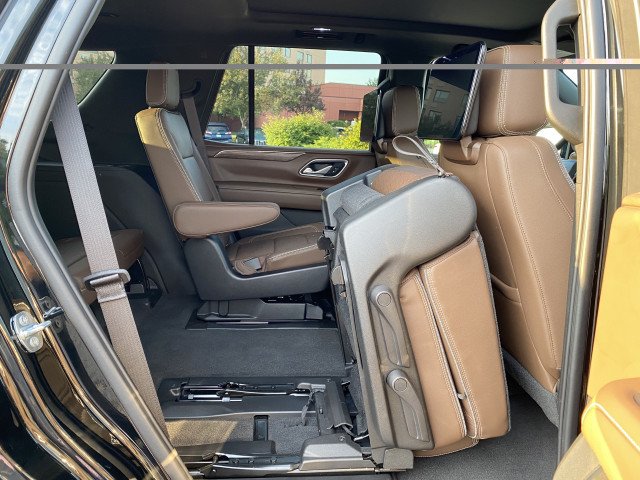 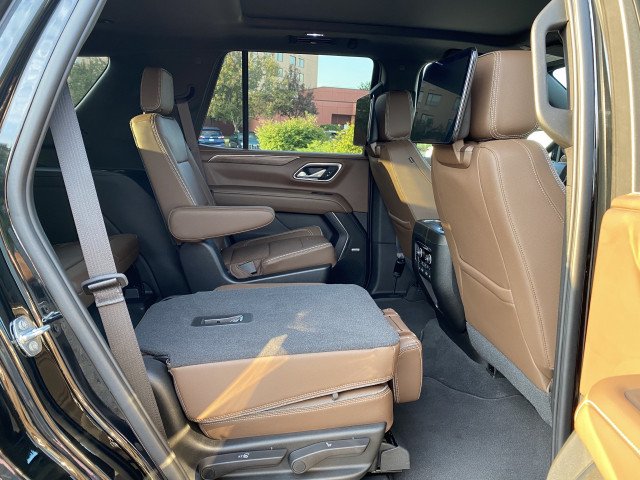 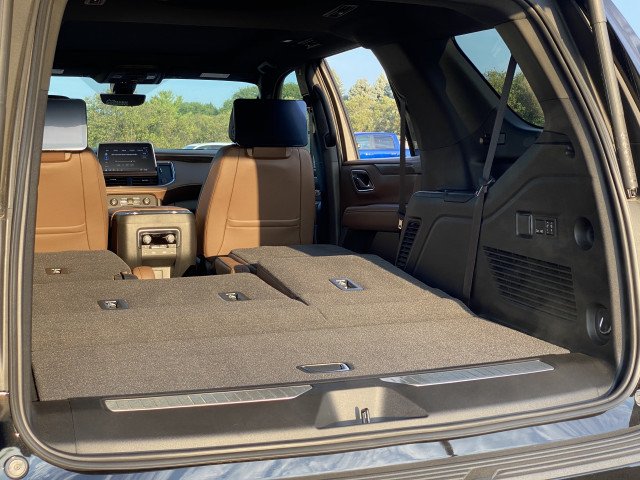 Second-row seats that slide forward and back five inches also help rear seat riders. A manual handle or rear strap folds and tumbles the second-row bucket seats forward for easier third-row access. Child safety seats would have to be removed, but third-row passengers could climb in and slip down the aisle in the High Country.

To haul something other than people, another manual handle collapses the seat and lowers it about two inches to create a flat floor for max storage for up to 122.9 cubic feet. Because the High Country is high priced, it has power-folding third row seats that can be lowered or raised from the cockpit or from the rear liftgate. Headrests need to be restored manually, and if the second-row seats are in the wayback position, the third row won’t fold flat.

Front-row riders aren’t neglected either. Clever storage pockets in the doors and on either side of the console are perfect for phones, wallets, pocketbooks, and VHS copies of “Big.”

A big change in the cabin is the shift from a steering-column mounted shifter to an electronic shifter on the dash between the wheel and the 10.2-inch touchscreen. I like the reassuring feel of a mechanical shifter, but the space saving and decluttering provided by the electronic shifter would appease Marie Kondo.

The available power center console ($350) would appease Russian nesting dolls. As big and broad as the Silverado’s console, the power console slides 10 inches back to reveal a hidden tray and a lower storage level. Couldn’t handbags just be tossed in a deeper single unit console? Sure, but this lets second-row riders access another set of cupholders and USB ports.

Second-row passengers might be too busy fiddling with the dual 12.6-inch LCD HD entertainment touchscreens in the seatback (part of the $3,355 tech package that includes adaptive cruise control). Either screen accepts HDMI inputs so Janie can watch one movie while Junior watches another. Then they can swap by pushing a button. Or they can actually help out around here and find directions to the nearest root beer float shop then share it with the navigation on the cockpit’s standard 10.2-inch touchscreen.

The screen is broad but unobtrusive, with big icons and an intuitive layout. Like last year, there is a small band of controls below it to access the home screen if you’re in Apple CarPlay.

Standard on the High Country are an 8.0-inch digital instrument cluster that complements a 15.0-inch head-up display that can be changed to three different displays, including one for navigation that was very helpful. 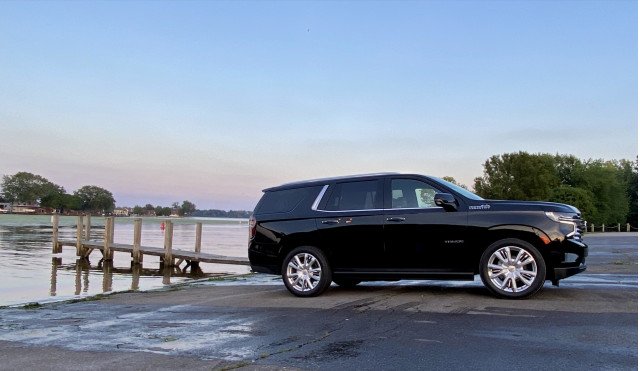 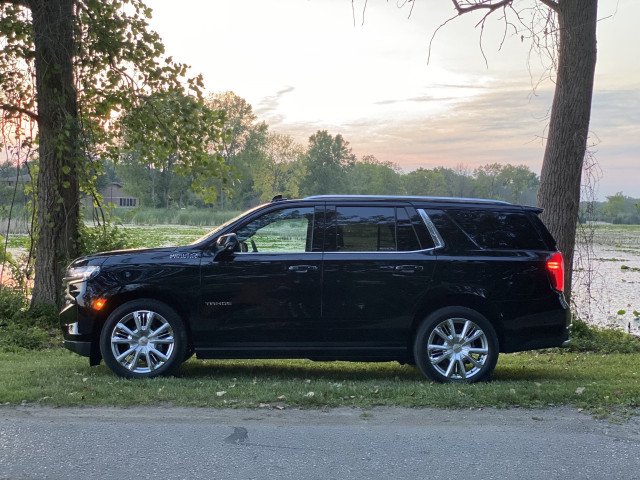 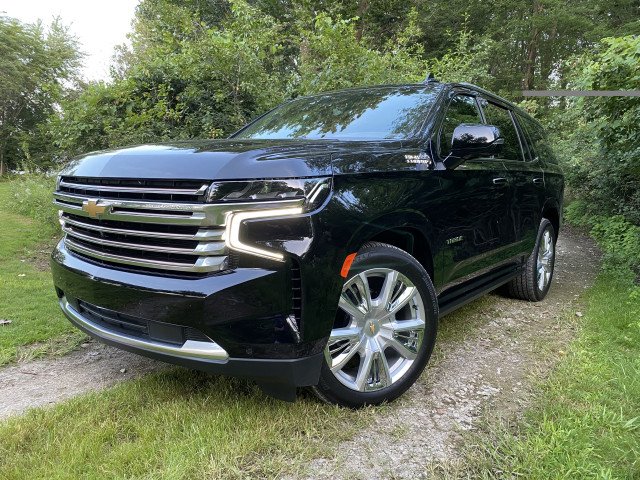 Road-tripping comes easy in the High Country. It comes standard with a 420-hp 6.2-liter V-8 that makes 460 pound-feet of torque. A standard 10-speed automatic transmission delivers that torque to four wheels (for $3,000 more). The transmission shifts effortlessly but also lets you dig in and let the big dog eat up to a 6,000-rpm roar. Hammer the throttle at any point and the V-8 answers the call with ease. But its road manners are much more impressive.

An independent rear suspension replaces the solid live axle in the 2020 Tahoe for a ride that better soaks up bumps and limits the bounciness in back. Add fast-reacting magnetic adaptive dampers standard on the High Country and each wheel carries its own burden to soften the overall impact inside. There were several neglected railroad crossings at pockmarked old roads along the Huron River that slowed many a vehicle. The 2021 Tahoe barreled over it without much shock to the system at all. The damping also mitigates some of the roll on hairpin 15-mph on-ramps in these parts.

For $1,000 extra, it’s easy to take the big easy a step further with a four-corner air suspension. The self-leveling system has a 4-inch range, and automatically lowers three-quarters of an inch on the highway for improved aerodynamics. The driver can set it to lower two inches when in park for easier entry and exit, and it can also be raised up to two inches off-roading for better ground clearance. The knob was hard to track in the dark, located by the automatic headlight dial near the left knee, but the instrument cluster display kept me up to date when it shifted to a low rider on 22-inch wheels. 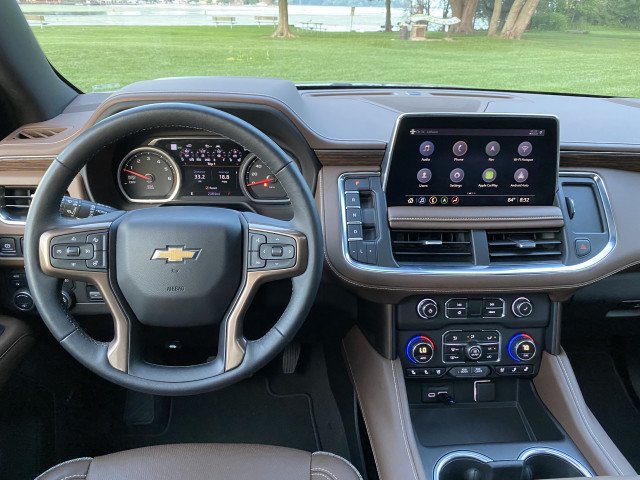 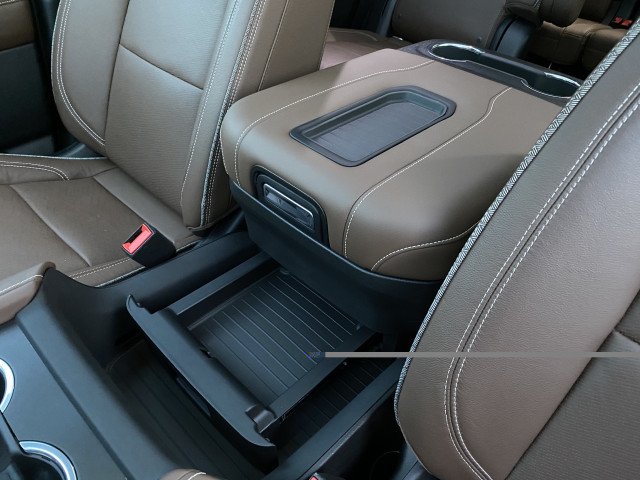 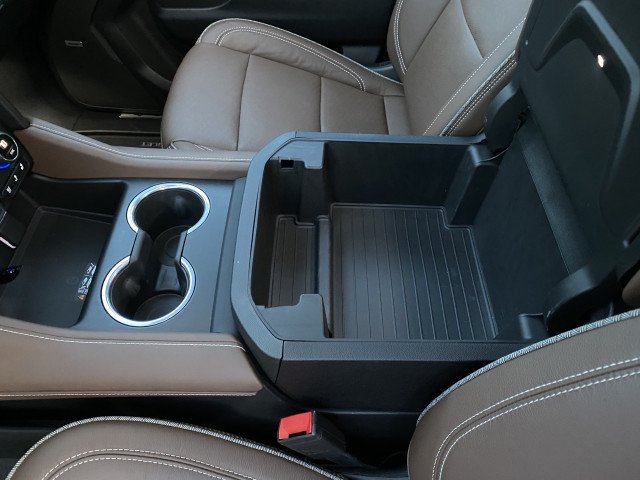 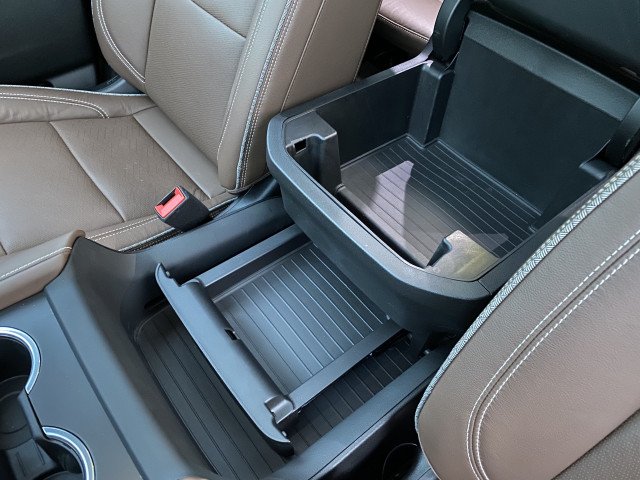 OK, Chevy, so you’re going to charge $74,000 and not include adaptive cruise control? This sticks in my craw as a way to bundle the tech package mentioned above and maximize the monies. At least automatic emergency braking is standard this time around.

In spite of fuel-saving technologies like cylinder deactivation, automatic stop/start, a 10-speed automatic that optimizes gearing, and an air suspension that can lower the highway ride height, the 6.2-liter V-8 loses one mpg from 2020 to an EPA-rated 14 mpg city, 19 highway, 16 combined. I averaged more than 17 mpg combined, and around town driving was even better than that so it appears to be on the conservative side.

The bigger Tahoe negatively affects fuel economy and lowers the max towing capacity from 8,600 to 8,400 pounds. Josh Baskin might say sock me in the stomach three more times, but that’s the tradeoff for getting big.

Chevrolet provided a day with the 2021 Tahoe High Country to bring you this firsthand report.